Whether there Feminized, Autoflowering or Medical, we have the best OG Kush seeds for sale online.

Find the best OG Kush seeds for sale here at VegPage, premium quality seeds in three different formats. Choose from the traditional feminized variety, easy-to-grow autoflowering seeds or our latest addition, medical CBD OG Kush seeds for sale, sold with guaranteed delivery to all parts of Europe and the USA included in the price.

OG Kush is a firm West Coast favorite, commanding some of the highest prices in the local Marijuana dispensaries. Said to have been created from the legendary Chemdawg strain, it has a unique sour-lemon and spicy flavor and has given rise to many new and exciting hybrids.

We offer three varieties of OG Kush seeds for sale, all of the highest quality and guaranteed to germinate.

Whether it’s the traditional feminized seeds, easy and fast flowering auto’s or CBD enriched medical seeds, you can enjoy all the taste and effects of your chosen variety at a fraction of the price when you grow your own OG Kush from seed.

Find out more about our OG Kush seeds for sale below. One of our most popular strains, these feminized OG Kush seeds for sale are all devoid of any male chromosomes and 100% guaranteed to germinate, creating one of the highest quality pure female Marijuana plants.

Although not the easiest Marijuana strain to grow, OG Kush can be cultivated both indoors, within a purpose-built growing area, or outside given warm, sunny conditions.

Flowering begins once the plants receive approximately 12 hours of uninterrupted darkness per night, continuing for between 8 – 9 weeks until the plant achieves complete maturity.

Great for night-time use, it has a THC content of 19%, inducing a fast, hard-hitting Indica ‘body-stone’ and is often prescribed to help reduce chronic pain such as arthritis, as well as stress, anxiety and insomnia.

Choose for our packets of 5, 10 and 20 feminized OG Kush seeds for sale, all sold with guaranteed delivery included in the price. With many reports and studies around the world concluding there may be medicinal benefits in CBD, a naturally occurring compound found within Marijuana and Cannabis, more and more people are looking to grow medical Marijuana with higher CBD levels and a reduced THC content.

Unlike recreational strains, CBD-rich Marijuana doesn’t get you ‘high’, but delivers a more concentrated dose of medicinal CBD, which can assist in combating chronic pain, especially joint and muscular such as arthritis and rheumatism, as well as several mental conditions including ADHD and PTSD.

Completely feminized and guaranteed to produce only the highest quality female plants, these CBD OG Kush seeds for sale are extremely popular with medical users, producing buds with that unique sour-lemon flavor and aroma, but without the powerful ‘high’.

Flowering begins as the daylight hours decrease to 12 hours per day, requiring a similar 8 – 9 weeks to traditional feminized seeds for the plants to achieve complete maturity.

With THC levels of less than 1% and an elevated CBD content of up to 15% these OG Kush seeds for sale are for medicinal use, and although the effects are very relaxing, they won’t get you ‘high’. If you’re looking for a faster, easier way to produce your own high quality harvest, these Autoflowering OG Kush seeds for sale are a great solution.

Unlike other feminized Marijuana seeds, autoflowering varieties grow and flower simultaneously, almost from sprouting. With no requirement for set hours of uninterrupted darkness.

OG Kush automatics will grow and flower over a nine week period, producing ripe, mature buds with all the taste, flavor and characteristics of traditional buds, but in a fraction of the time, and requiring less experience, effort and attention.

Grown outdoors, you can produce your own harvest of high quality OG Kush buds every 9 weeks with staggered planting from early Spring through to the middle of Summer.

Although yields are smaller, with each plant yielding approximately 5 oz of high quality buds, their increased speed and natural flowering ability, enables several harvests to be produced over a complete growing season.

Expect similar THC levels at approximately 19%, inducing a euphoric, happy and relaxing ‘high’ that’s great for evening and social use. With all the sour-lemon flavor and spicy aroma associated with OG Kush, these buds are identical to traditional varieties in almost every way.

We now have Autoflowering OG Kush seeds for sale in packs of 5, 10 and 20 seed packets, with free, guaranteed delivery to all parts of the USA.

We offer some of the best OG Kush seeds for sale, all sold with guaranteed delivery included in the price. Dispatched by I Love Growing Marijuana, a world leader in the production and supply of the highest quality Marijuana and Cannabis seeds, all purchases are shipped using the latest ‘stealth’ packaging methods.

Payment is totally secure, with a selection of options available including cash, credit or debit card, bank transfer and Bitcoin, with all transactions undertaken by I Love Growing Marijuana, and completely guaranteed. If your shipment fails to arrive, replacements will be dispatched as soon as possible under their 100% shipping guarantee.

Enjoy all the help and assistance you may require from purchase through to harvest, and grow the very best quality Marijuana with these top-class OG Kush seeds for sale.

OG Kush isn’t the easiest strain of Marijuana to grow, and producing a successful harvest can require several attempts. Although all Cannabis and Marijuana seeds require similar amounts of water, fresh air, sunlight and nutrients, some strains are more prone to attack from bugs, mildew and mold infections than others.

You can avoid many of the basic mistakes made by new and inexperienced growers by learning how to read the first, ‘tell-tale’ signs that something is wrong with your plants by simply downloading and reading the Marijuana Grow Guide, written by Robert Bergman, owner and founder of I Love Growing Marijuana and once a professional Amsterdam Marijuana grower.

Learn how to correctly germinate your seeds to achieve complete 100% germination. The techniques used by ‘cash-crop’ growers to enhance and maximize the potential yield from their plants, and when to harvest for maximum yield, potency and flavor, as well as a host of tips and methods to enhance the quantity and quality of your harvests.

Whether you choose to buy our OG Kush seeds for sale, or not, download the free and instantly available Marijuana Grow Guide and learn more about growing your own recreational and medicinal Marijuana today. 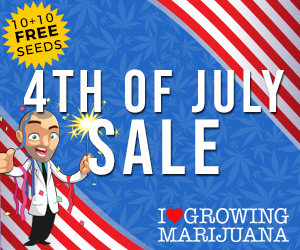