Barneys Farm Critical Kush new release with huge yields, a fast flowering period and that distinctive OG Kush taste. Producing yields of up to 750 grams per square meter, Critical Kush is destined to be one of the very best selling Marijuana Seeds in 2013.

Barneys Farm Critical Kush is one of the new strains released in 2012 by this award winning Marijuana Seed Company. Combining two stable and respected strains, OG Kush together with Critical Mass, the Barneys Farm team have created a serious cash-cropper for indoor gardeners who demand more from their plants.

Combining two vigorous Indica Marijuana strains together has produced one of the strongest plants available, with THC levels hitting an average of 25% and CBD’s of 2.1% a perfect strain of Medical Marijuana for many ailments, as well as a knock-out Indica stone that numbs the senses and “couch-locks” the body. 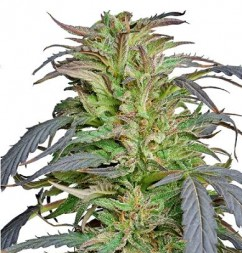 Barneys Farm Critical Kush grows into the standard Indica Marijuana shape, remaining short and squat, while developing an abundance of strong lateral branches. Height is not a concern with these plants, as overall mature height tends to be approximately 1 meter, however, a longer growing period would increase that, but to little benefit, instead, Super-Cropping techniques are better employed.

As with all classic Indica’s the flowering period remains around the average of eight to nine weeks, with little variation between the plants. The yield obtained from these plants dwarfs the standard OG Kush strains and almost all hybrids, due to the introduction og the Critical Mass genetics.

Bending the top is a great way to promote stronger lateral branching, and Critical Kush requires strong branches, or supporting as the buds mature.  The budding sites are tight, very close together, with a low leaf to bud ratio, so the large Indica fan leaves do not shade the flowers from the light.

Maturity is easy is spot, with the buds swelling and hardening, almost losing all the flowers, and with only a small number of waste leaves, harvesting is not a lengthy affair. As with many of the Indica strains, the buds are sticky and frosty coated, but high levels of THC.

Yield is a major factor in determining which Marijuana Seeds to buy, and Barneys Farm Critical Kush ticks all the boxes. With reported yields of 750 grams per square meter, this is the strain that many indoor Marijuana growers have been waiting for.