Choosing the best Marijuana Seeds to grow can sometimes be a tricky decision with many variables to consider, such as; are you looking for Indica or Sativa Marijuana Seeds? Do you want high quality, as well as good quantity levels? Do you want a strain that has been tested and judged a true champion, that stands out in the many  Cannabis Cup lists of champions? 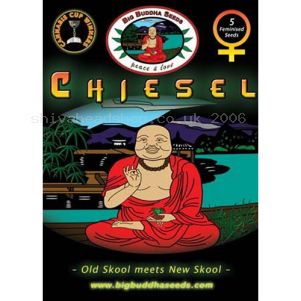 Big Buddha Seeds Chiesel is the perfect combination of 60% Sativa, supplied by the NYC Diesel from Soma Seeds, and 40% Indica, via the Big Buddha Cheese. The addition of the NYC Diesel, introduced a greater strength and vigor to the Original Cheese, as well as that distinctive grapefruit taste commonly associated with the Sour Diesel strains.

In vegative growth, Big Buddha Seeds Chiesel can appear slender, similar to the original Cheese, although with its fast flowering qualities is quickly thickens to support the Indica-like buds. Flowering time can differ from 56-70  days, so 8-10 weeks dependent upon the size of the plant and the environment it is grown in, Big Buddha Seeds Chiesel  benefits from a hydroponics garden set-up for fastest and greatest yield, with flowering times at approximately 60 days.

Once harvested, dried and cured, Big Buddha Seeds Chiesel offers an unmistakable aroma of Cheese and Grapefruit, a collaboration of two champions, where both are detectable and neither overwhelms the other. Offering an insane high, thats is both enjoyable and long lasting, it contains a good balance of THC, CBD and CBN to offer a celebral high, that is both uplifting and creative. A very good pain killer and appetite inducer, Big Buddha Seeds Chiesel offers a variety of Medical Marijuanaproperties, as well as being very effective for the more creative members of the population, Songwriters, Artists and Authors ect.

Big Buddha Seeds Chiesel offers a stable Marijuana strain that is well adapted to indoor growing. Offering  high quality buds in approximately 8 weeks, it can be relied upon time after time to produce one of the most unique tasting strains of Medical Marijuana available. Soaring highs and good yields are the signs of a true champion, Big Buddha Seeds Chieselhas them both.