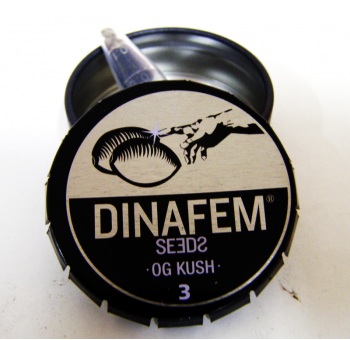 The latest release in the OG Kush Marijuana strains is from the world renowned Spanish Company Dinafem Seeds. Available today through us here at VegPage, your No#1 provider of fresh Medical Marijuana Seeds to the USA. You can purchase the new Dinafem OG Kush in packets of 1, 3, 5 or 10 Feminized Marijuana Seeds per pack.

By the end of the first decade of the 21st century, Dinafem had been consolidated, at international level, as a seed bank of recognized quality. Incorporating well-known strains such as Cheese, Industrial Plant (based on the famous Northern Lights) and new autoflowering strains by the end of 2009.

In 2010, Dinafem featured a record number of varieties: 10 new strains, of which 3 were Autoflowering Seed lines. That year, they received  a special recognition, when one of their first strains and perhaps the best known of the Dinafem Seeds brand, Moby Dick, was named by the readers of Soft Secrets, as “Girl of the Year 2010”.

It’s been 5 years since Dinafem Seeds was officially founded, and they can proudly say that,  Moby Dick achieved, for the first time, the award given to a non-Dutch strain.

Currently, Dinafem Seeds is present in all European countries where seeds are sold. We are increasingly present in the rest of the world, being considered  a quality leader seed bank concerning autoflowering and feminized seeds. Through links with VegPage, we are proud to offer Dinafem OG Kush Seeds to the USA.