Ban On Medical Marijuana To Be Repealed in Los Angeles.

The Los Angeles City Council has voted to repeal the ban on medical marijuana dispensaries. The Council voted in July to ban marijuana dispensaries across the city. Medical marijuana advocates, furious, successfully suspended the ban in August before it went into place by delivering 50,000 signatures calling for a referendum on the ban. Tuesday, instead of having it go to a ballot vote on March 5, the City Council voted 11-2 to reverse its own ban.

Councilman Bill Rosendahl, who has been undergoing chemotherapy for cancer, pleaded with the council Tuesday to lift the ban, saying, “Where does anybody go, even a councilman go, to get his medical marijuana?,” the Los Angeles Times reports.

The ban, authored by Councilman Jose Huizar and backed by Mayor Antonio Villaraigosa and Police Chief Charlie Beck, would have shut down an estimated 1,000 medical marijuana dispensaries in the city, including those that have complied with the law. Instead of using dispensaries, groups of three or fewer marijuana patients would have been allowed to grow medical marijuana in their homes. 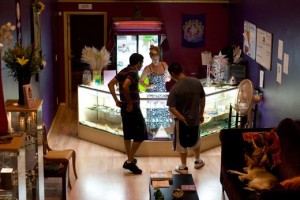 Opponents of the ban on Medical Marijuana said that most sick patients do not have either the ability, time or funds to grow medical-grade marijuana at home. Meanwhile, proponents of the ban said the dispensaries are nuisances that attract crime and drive away business. Others complained that they have become so numerous that there are dozens within just a few blocks in some neighborhoods.

More than 175 California cities and 20 counties have banned medical marijuana dispensaries, according to the medical marijuana advocacy group Americans for Safe Access. The state Supreme Court is expected to address whether local governments can ban marijuana clinics, although a hearing has not been set, the Associated Press reports. LA council members in support of reversing the ban said Tuesday they need better guidance from California legislators on the state’s marijuana law.

Councilman Rosendahl, who said he began using marijuana a decade ago to treat neuropathy and a pain in his feet, said that the council’s decision Tuesday was a “very emotional moment” for him, the Times reports. And, although he could physically only speak in a whisper, he criticized President Barack Obama’s federal raids of California dispensaries.

You can discover all the very latest news on the changes in Medical Marijuana laws here at VegPage.

← Where To Get Cannabis Seeds
Effect Of Medical Marijuana On The Memory. →