Big Buddha Seeds, even the name conjures up images of huge “cheesy” cola’s and a wealth of hybrids and crosses to make you drool at the mouth, you can almost taste those exotic and exquisite flavors that are only available when the Big Buddha mixes his magical Cheese with another equally established Marijuana strain. From the very best Indica’s and Sativa’s, through to Autoflowering strains, the hybrid Marijuana strains created using the Big Buddha mother or all unique, strong and highly rewarding to grow.

For a complete review of all of the Big Buddha Seeds collection, click any of the Big Buddha Marijuana strains on the right hand side of this page. For those of you who wish to read a short review of some of our personal favorites, check out the list below. 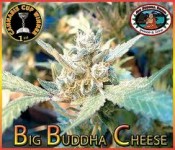 The UK’s leading strain and Cannabis Cup winner. Big Buddha Cheese seeds are the backcrossed sensation that took the Cannabis community by storm. Originally a “Clone-Only” plant that was passed around the Exodus growing community during the 1980’s, this rogue Skunk #1 plant was subsequently developed in the UK and quickly became one of the countries leading Cannabis strains, culminating in the winning of the Cannabis Cup. With its unmistakable aroma and taste, The Cheese produces an uplifting high and couch-locking stone due to the Afghani parentage. Available as 5 or 10 feminized Marijuana Seeds, and with discreet world-wide shipping from the Original Seed Company, Big Buddha Cheese seeds produce some of the most stable Indica  Marijuana plants available. Flowering period of 7-9 weeks. 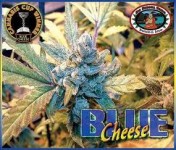 A favorite of many smokers, the Big Buddha Blue Cheese offers the soaring high’s of the Original Cheese, combined with the very best Blueberry strain available. If you’re looking for that fruity taste, with a clear, long lasting high, this could be the Marijuana strain for you. Sold as 5 or 10 feminized seeds, these high quality seeds produce short, bushy plants producing an abundance of  hard, dense buds and a sizable harvest. The genetic breakdown of 75% Indica and 25% Sativa supplies an incredible taste and euphoric high, and excellent all round plant with an exceptional tasting harvest. Grow with a medium vegetation period followed by 8-10 weeks of flowering.

Cheese Automatic is the next generation in Autoflowering seeds, bred with improved growth and stability, as well as a far greater taste and more defined flavor than available with the previously released auto seeds. One of the easiest forms of Marijuana to grow, requiring very little maintenance, perfect for a Sea-Of-Green garden. Mature from seed in 8-10 weeks, depending upon conditions, producing a Candy taste with floral and lavender undertones, Big Buddha Seeds Cheese Automatic is a combination of 20% Ruderalis  30% Sativa and 50% Indica and available as single seeds or feminized packets of 5 and 10 seeds. 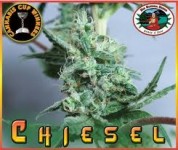 Discover the world of  Big Buddha Seeds and you will find that there are many forms of the original Cheese seeds available as hybrids, crossed with many of the worlds most sought after and popular Marijuana strains. Big Buddha Seeds Chiesel is the result of perfected cross breeding techniques that have allowed the Cheese to be breed with other world famous Cannabis strains. Chiesel is the hybrid daughter of The Cheese and Sour Diesel. The perfect culmination of both European and American champion Cannabis strains, brought together and infused, creating an old skool Cheese with grapefruit undertones, a true product of champions, containing Soma’s world-famous NYC Diesel and Big Buddha Seeds Original Cheese. With a powerful blend of 60% Sativa and 40% Indica, it packs a sour punch with delicious undertones. Growing time 8-10 weeks.

By accident, the Big Buddha Seeds Cheese become fertilized by a Bubba Kush male plant, resulting in one of the most explosive Indica’s currently available. The subsequent Marijuana seeds from these two Marijuana strains resulted in the very best Afghan Kush genetics surfacing, producing an explosive, and very easy to grow Marijuana strain. Originally beginning as a Cheese X Bubblegum strain, a cutting came into contact with the Bubba Kush, and so a delicious new strain was born. Ideal in an Indoor “Sea Of Green” garden as it produces a large, stout and squat plant, benefiting greatly from Super-Cropping techniques, such as pruning or bending. If you enjoy fast, easy to grow heavy hitting Indicas, then Big Buddha Seeds Bubble Cheese offers you the perfect choice. Predominately Indica, and displaying classic tendencies, this plant is fully mature in 8-10 weeks. 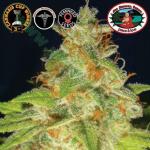 With the Big Buddha’s extensive research into classic American Marijuana strains, we present Buddha Tahoe. The Tahoe OG Kush was selected to be the representative for the Buddha Seeds catalogue due to its extreme potency, combined with the unmistakable sharpness of all quality Kush Marijuana strains. Producing vibrant vegative growth, culminating in an abundance of extremely potent, lemon tasting buds, the Buddha Tahoe feminized Marijuana seeds represent the new-wave of Kush strains. With Cannabis Cup winning credentials Buddha Tahoe is set to become the Godfather of Marijuana strains.  A true 100% Indica that matures between 60 and 64 days from the initiation of flowering. 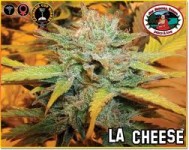 Two highly acclaimed and awarded Marijuana strains were combined when the Big Buddha Cheese fused with the LA Confidential from DNA Genetics, one of California’s most popular seed breeders. The LA Confidential is a highly popular strain with its own unique taste, and although this arrives on the taste buds after the initial unmistakable “Cheese” taste, its aroma and bouquet are still distinguishable. The LA Cheese matures into an extremely pungent plant with an over-powering aroma. The dense, hard nuggets produced are both satisfying to the connoisseur and commercial growers alike, and as feminized Marijuana Seeds their quality is guaranteed. Predominately Indica, with 10% Sativa injected into the genetics, these Big Buddha La Cheese plants mature between 55-70 days from the beginning of flowering. 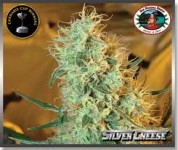 Buddha Big Seeds Silver Cheese is the culmination of years of dedicated research into perfecting the most stable phenotype to bare the name of Silver Cheese. Selecting a stable clone and reproducing it to grow exact replicas is difficult enough, combining the Indica traits to the established genetic make-up of the Super Silver Haze was beginning to look impossible, however, finally Big Buddha are proud to release the Silver Cheese, the most stable feminized Marijuana seed culmination of Super Silver Haze and the Original Big Buddha Cheese. A fast growing hybrid producing the very higest quality medical marijuana for many ailments. Expect an array of mouth watering  tastes and flavors as the sweetness of the Silver Haze collides with the pungent Cheese aroma and surf the tsunami to the highest of highs. Providing a mixture of 75% Sativa ans 25% Indica, the Silver Cheese will be ready to harvest between weeks 9-11. 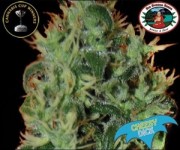 Big Buddha Seeds Cheesy Dick  is a humorous name that suggests that this particular Cheese hybrid is a fun cross designed for the novelty factor, when in fact nothing could be further from the truth. Created in Spain, Cheesy Dick cam trace its parentage back to the creation of Moby Dick, a Critical Mass X Jack Herer hybrid. Moby Dick produces large yields with a strong THC and resin content. It was only a matter of time before Big Budddha Seeds introduced their ‘Old Skool Classic’ Big Buddha Cheese into the mix, the outcome, Cheesy Dick. Big Buddha Seeds Cheesy Dick produces a spicy, Indica dominated Marijuana plant with a musky, Buddha Cheese taste. With seriously high yields, and a resin content to knock-out even the most hardened smoker, you will be pleasantly surprised by the yield and strength of the Cheesy Dick. Almost pure Indica, 95% with just a hint of Sativa, 5% and mature in 8-10 weeks. 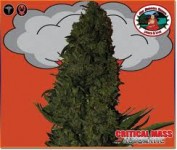