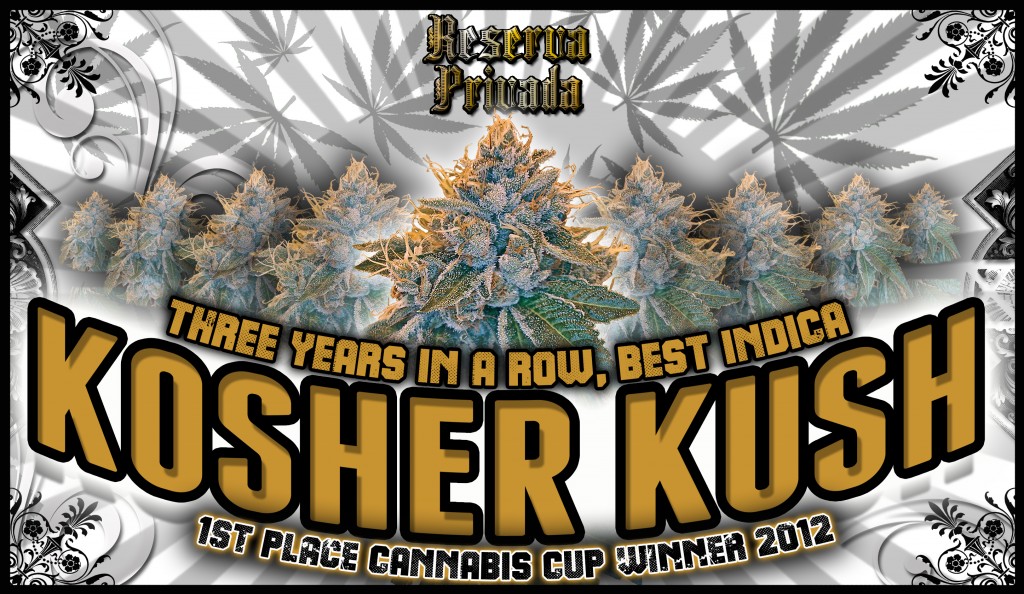 OG Kush Seeds are available in a wide number of varieties, all unique and highly sort after. Although the Kush Marijuana strains are known throughout the world, it is America where it is most popular, forming a large percentage of their Medical Marijuana collections. When you think of true, high quality OG Kush seeds, two companies with shared parentage spring to mind, DNA Genetics and Reserva Privada. Offering some of the very best quality OG Kush, we take a closer look at some of the most popular OG Kush seeds from these two, highly awarded Marijuana Seed producers.

Reserva Privada and DNA Genetics are both West Coast of America Marijuana Seed producers who hold extensive collections of OG Kush Seeds. With a variety of strains ranging from the purest OG Kush to a collection of high quality hybrids, each offering a variation on the aroma, quantity and taste, while maintaining the highest quality.  Both DNA Genetics and Reserva Privada offer many of their Marijuana seeds as both Feminized 6 seed packets and 13 Regular Marijuana seed packs, giving you one extra feminized seed, and 3 free Regular Marijuana Seeds for the advertised price instead of the more customary 5 and 10 seed packs available.

For many smokers and Marijuana growers the Purple Kush supplies the right blend OG Kush features, while offering a unique variation on its original parentage. If you’re looking for the ‘Royal Indica’ of Marijuana seeds, then the Granddaddy Purple Genetics team have the best Purple Kush available right here, and available for world-wide delivery. Of the OG Kush hybrids the Purple Kush is possibly one of the most popular, offering puffy buds that are dense and hard with an unmistakable aroma and sensational color scheme as maturity approaches. For OG Kush admirers, the Purple Kush is the real deal, offering magnificent purple colored buds that appear to shine and sparkle, due to the extreme crystal formations as well as potential to achieve up to 700 grams per square meter when given the correct growing conditions. With a flowering time of between 8-9 weeks, this Indica Marijuana plant grows to between 1-1.5 meters tall indoors, meaning super cropping techniques are best used to control the height and maximize the yield.

Accept no imitations is the message that Reserva Privada send out with the Original OG Kush. A legend of the highest quality, Reserva Privada OG Kush is the preferred choice of the connoisseur Marijuana smoker.  With good yield of between 400-500 grams per square meter, and a flowering period of 8-9 weeks, this is one of the most popular and sought after Medical Marijuana strains available. With its genetics based in the Chemdog ’91, the Reserva Privada OG Kush was originally only available in clone form. However, it genuine Reserva Privada OG Kush seeds are now available in both feminized 6 seed packets, and regular 13 seed packets. A little stretchy in growth, but filling out while flowering are the general growing traits of this OG Kush strain, producing compact, hard crystal coated buds as she nears maturity. A great strain for super-cropping techniques, producing a high quality, reasonable yield that produces an energetic high when consumed. A worthy Cannabis Cup winner, and highly prized Marijuana strain.

Although not a true OG Kush strain, DNA Genetics LA Confidential has its genetics heavily based in the OG Kush genetic line. One of the most heavily awarded and most popular pure Medical Marijuana stain, it’s well-known for its pain relieve and elimination of insomnia, this baby will knock you out!!  Available as 6 or 13 Regular Marijuana seeds, and with a flowering period of between 7-8 weeks, this pure Indica produces reasonable yields of between 350-400 grams per square meter.

Although not a true OG Kush, Brains OG Kush deserves its position in our hall of OG Kush seeds. Offering exceptionally high yields, this Medical Marijuana strain is the perfect cash-cropper. However, it’s not not about the money, the high produced by this Indica dominant Marijuana plant is both hard hitting and relaxing, offering supreme pain relief and a body stone that can create drowsiness for the user. An absolute must in any heavy users garden, indoor the Brains OG Kush produces an average of 130 grams per plant, while outdoors, 700 grams of high quality Medical Marijuana buds have been achieved.

One of the many popular hybrids of the OG Kush is the Bubba Kush from Green House Seeds.A stable hybrid cross of Bubble Gum ans Kush, the strain offers sweet tasting buds that produce a relaxing, pain killing effect when consumed. Almost pure Indica, Bubba Kush is commonly found in many of the Medical Marijuana dispensaries and is also prescribed for several diet issues and illnesses, as it has a tendency to increase the appetite.

Royal Queen Seeds supply the Royal OG Kush, and while people compare reasons as to the name, some say it stands for Original Gangster, other, Ocean Grown, one thing that is agreed upon is the unique, dank slightly chemical aroma that oozes from real OG Kush. Royal Queen Seeds have one of the longest standing and highest Dutch Marijuana seed banks, and have injected both time and effort in produced what they consider to be one of the most stable OG Kush starins available. Available as Single Seeds, or in packets of 3, 5 and 10 feminized Marijuana Seeds, Royal Queen OG Kush Seeds are guaranteed to be of the highest quality.

There are many other hybrids and unique crosses of the Original OG Kush Seeds, offering a complete variety of flavors from grapefruit and the fruit varieties, to OG Kush infused with Sour Diesel, one of the other, most popular forms of Medical Marijuana available in America at present.

If your looking for the very best prices, as well as guaranteed discreet shipping, The Original Seed Company offer one of the very best collections, enter the OG Kush shop below to discover more.

Find out more about our most popular OG Kush Seeds