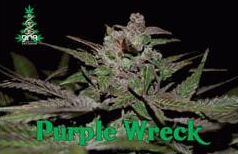 Together with DNA Genetics, Reserva Privada Purple Wreck Feminized Marijuana Seeds are the result of crossing their Urkel mother plant with a T4 Trainwreck male. Urkel is one of California’s most sought after Marijuana strains, demanding the highest price when available for sale.

The resulting cross of the Urkel mother with a Train Wreck male resulted in short, squat Marijuana plant, contain 60/40 Indica to Sativa genetics. A strong, vibrant form of Purple Kush, although not a true Purple strain it does contain many Purple Kush attributes, including the anticipated purple coloring which defines the Purple Marijuana strains so well.

Reserva Privada Purple Wreck Feminized Marijuana Seeds flower and mature at approximately eight weeks from the onset of flowering, Marijuana growers can expect their plants to grow large buds with the defined purple coloring which increases as the plant matures.

The introduction of Train Wreck with Urkel has resulted in Purple Wreck feminized seeds that grow quicker and more vigorously than the original Urkel, but still maintains the distinctive sweet, fruity aroma and flavor. Its Train Wreck father kindly donated its large exploding buds, which now incorporate the purple hue and coloring from its Urkel mother.

You can learn more about our recommended Purple Kush strains and Marijuana Seeds below.