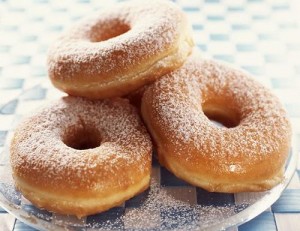 How To Make Stoner Doughnuts.

In a large mixing bowl, mix the 1 cup of sugar and softened canna butter, subsequently adding the eggs and mixing them in, followed by the cannabis milk.

Now in a separate bowl, mix the flour, baking powder, cinnamon and salt.  Slowly but surely, add the mixture from the first bowl, in with the dry ingredients in the second bowl, beating thoroughly.

On a floured surface, knead gently, rolling the dough out to a rectangle that is about 1/4″ thick.

The easy way to cut out shapes for the doughnuts is to use a doughnut cutter.  If you don’t have one, you can cut them by hand or use two circular objects to do the job.

Take out, drain and sprinkle generously with confectioner’s sugar.