Northern Lights is one of three fundamental breeding strains that have changed the face of global cannabis culture over the last three decades. Apart from Skunk #1 and Haze, no variety comes close to matching Northern Lights’ influence on the world of weed. Whether you’re a smoker, a grower or a breeder, it’s more than likely this strain has had a direct effect on your understanding of ganja. 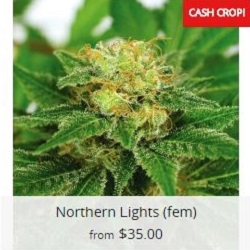 Virtually every cannabis enthusiast has, at the very least, had their day brightened by a fat bud of Northern Lights or one of her hybrid descendants. As far back as the Eighties, Northern Lights seeds started setting the standard by which other Indica’s are still judged and she remains one of the most trusted names and sought-after varieties in modern cannabis culture.

For many years, Northern Lights seeds dominated the various harvest festivals, winning cup after cup, leading to a more than one request that she be retired from competition in order to allow other strains a shot at the title.

It was initially a stabilized cannabis sativa strain crossed with an Afghani indica hybrid. Northern Lights traveled to Holland as a clone where it was introduced to the commercial cannabis seed market in 1985 by The Seed Bank. Because it arrived as a clone it could not be inbred for stability and cannabis seed production, therefore Skunk No 1 and Original Haze were used to produce seeds off it so it could be used as a parent plant.

Northern Lights distinctly shows its Afghani indica genetic background; it is a small plant that produces, big highly resinous flowers. Although it was initially developed for indoor growers excellent results have been produced outside.Northern Lights has a sweet resinous taste and produces a physical comfortable but lazy feeling, known to some as ‘couch lock’.

Northern Lights seeds will grow as high as 1.2 m tall indoors, but it will stretch to over 2 m tall outside. It will produce relatively wider internode spacing, with long thin leafs, demonstrating its sativa background. Upon flowering is when its Afghan heritage comes to life, with dense, resin-covered nuggets which form all over the plant; however, it will produce a giant main cola.

It will yield on average 50-60 g per plant, or about 500 g per square meter under a 600 watt light. Grown outdoors, it can give as much as 100 g per plant, but will need the nice warm environment of southern Spain, California or North Africa. Placed in full sunlight and given enough food and water, Northern Lights will grow into a tree and give excellent results for yield.

Flowering is complete after 7-8 weeks, although some growers report harvesting after just 7 weeks. During the flowering process, all buds are formed with a light, resin-covered surface which starts to glow towards the end of the grow.

Northern Lights seeds produce one of those knockout smokes that guarantees a couch-lock session for the next few minutes. The Afghan heritage really shines through in the smoke, and anyone looking for that strong stone need seek no further than Northern Lights Feminized.