Two weeks from Thanksgiving Day, potheads all over Washington State will finally get to emerge from the shadows, bongs held high.

Marijuana possession is about to be legal in the Evergreen State, just like it’s about to be legal in Colorado. Already, prosecutors in King and Pierce counties dropped 220 pending pot-possession cases, knowing it might be tough to get a jury conviction in a state where it’s now legal (even if the law isn’t technically retroactive). But when you burn it all down and examine the various catch-22’s of Initiative 502, it becomes pretty readily apparent that Seattle is not about to become America’s Amsterdam—not anytime soon, anyway. Here’s a guide to the potential buzz kills:

It’s still illegal. Federally, at least, and the feds have proven themselves lousy at looking the other way in recent years, especially as medical marijuana dispensaries (for medicinal purposes, weed is legal in 18 states) have sprouted up across the country. Most experts don’t predict a crackdown in Washington; even Mitch Barker, retired police chief and executive director of the anti-legal-weed Washington Association of Sheriff’s and Police Chiefs, tells The Daily Beast, “I don’t think we’ll see a clash with the feds at all.” But that party at your DEA buddy’s house on Saturday? Might want to leave the Purple Kush back at the crib.

What Are The Marijuana Laws in Washington State? 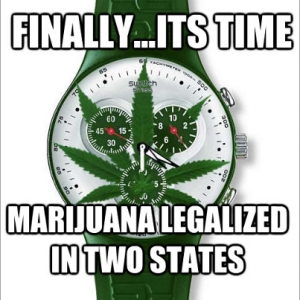 You can’t really buy it. That’s because technically, you’re not allowed to sell it; not until the state develops a licensing system in the coming year and figures out how best to regulate distribution. The law requires weed be sold in standalone storefronts where nothing else is sold, says Seattle City Attorney and initiative co-sponsor Pete Holmes.

You can’t stock up for the apocalypse. Users are allowed 28 grams (an ounce) of plant matter, along with 16 ounces of edible product (think pot brownies) and 72 ounces of infused liquid (they make marijuana olive oil now).

You can’t hotbox your dad’s van. Especially if you’re not 21, because you’re too young to legally possess marijuana, in accordance with I-502. But even if you are 21, it’s illegal under 502 to drive with more than five nanograms of THC per milliliter of blood, and it might be a little tricky for the people to figure out whether they’ve reached that threshold, at least without a home lab. It’s illegal to drive impaired, and marijuana smoke seeping out of the windows you roll down after California-rolling through that stop sign and getting pulled over, that’s plenty probable cause for a sobriety check, and a blood test.

Or, as Holmes puts it, “If you’re squealing your tires, driving two miles an hour, crossing the center line and the officer smells marijuana smoke” after you get pulled over, 502 won’t help you.

You can’t smoke outside. For the same reasons you can’t drink outside. The law treats Mary Jane just like it does Jim Beam.

You can’t smoke inside. Not in public places, anyway, like bars, restaurants, hospital rooms, and elementary-school gymnasiums. It’s verboten to smoke anything indoors, much less reefer. It’s also not allowed on the same premises where the marijuana is sold.

“If you’re squealing your tires, driving two miles an hour, crossing the center line and the officer smells marijuana smoke” 502 won’t help you.
You can’t show anyone how sticky your stash is. This awesome Q&A from the Seattle Police titled “Marijwhatnow?” explains that “it is unlawful to open a package containing marijuana … in view of the general public.”

You might get fired. Just like the Washington law is superseded by federal drug policy, it also has no effect on the The Drug Free Workplace Act, or the state law that gives employers the right to randomly drug test their forklift drivers and garbage collectors, and then fire anyone who fails said test, legal substance coursing through their veins or not. Boeing (maker of jumbo jets) was one of several companies to make perfectly clear in the wake of November’s election that it’s still not cool for people who build airplanes to be getting lit, even if they do so in the privacy of their own foyer.

The Marijuana Laws in Washington State

So where’s that leave us? To wrap up, it’s OK to smoke weed, as long as you do it in your own house, don’t buy it from anyone, don’t grow it, don’t drive while smoking it, don’t smoke it in a public park, or a bar, or in one of those increasingly no-smoking zones outside public places. But beyond that, freedom has at long last arrived.